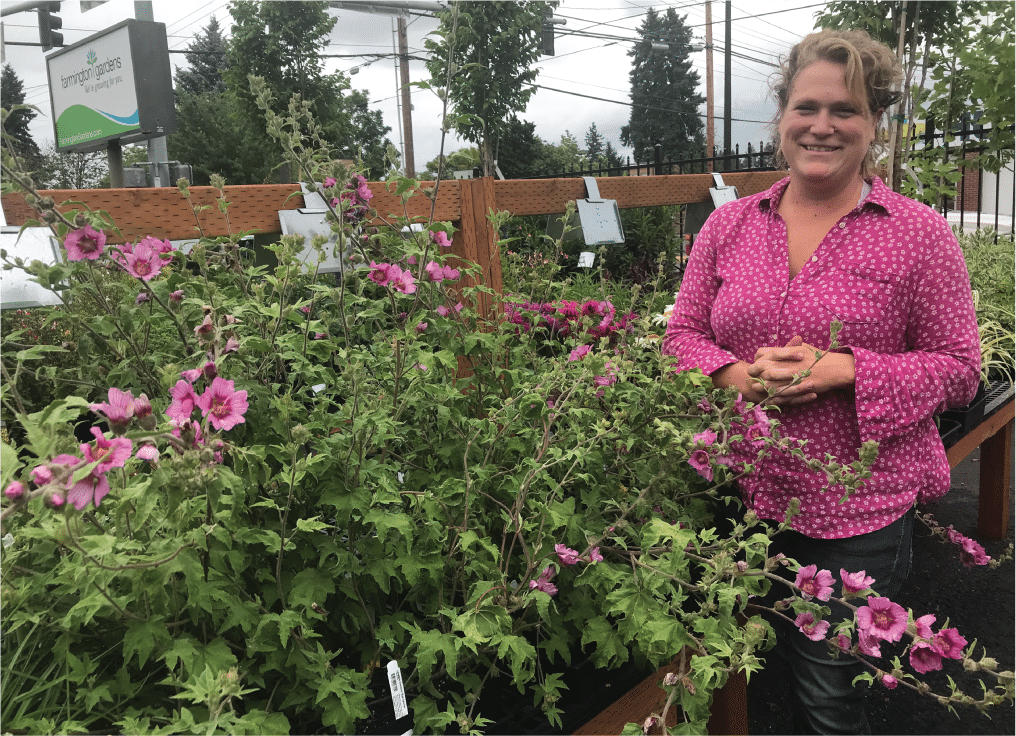 Stephanie is the kind of person you definitely want on your team. And Farmington Gardens is so very fortunate to have her on ours.

Stephanie brings so much to the company in every aspect. Extremely hard working, knowledgeable, committed, and creative, Stephanie is also known for her positive attitude and kind personality. “She always has a smile on her face and is so positive,” says co-worker Angie, who was trained and mentored by Stephanie. “She is such a strong woman and thinks outside the box. Something that seems impossible, she will find a way to pull it off.”

Originally Stephanie had thought she would be a teacher. And she would have made a great one. But after taking an Urban Farming class in college, she was hooked, and soon changed directions, attaining a degree in Environmental Sociology from U of O. After graduating, she began working for a well-established wholesale/retail nursery in the Eugene area. While there, Stephanie learned every aspect of the nursery industry, moving up from customer service, to eventually managing. During that time, she also owned and operated a small landscape company with her husband. After the birth of her daughter, she moved back to the area to be closer family, and soon after, stared at Farmington Gardens. Initially in Customer Service, Stephanie soon found herself working her way up within the company, taking on a variety of different roles. From Department Manager of the greenhouse, perennials, gift shop, and hardgoods, to merchandising displays throughout the nursery, and special events like Tomato Fest and Customer Appreciation, Stephanie has done it all.

“You can really tell she loves what she does.” says Cecy. “I have learned so much from her. She has so many fresh ideas, and never, never stops thinking.” she laughs.

Stephanie is now the manager of Baseline Farmington Gardens & Floral and has been tirelessly working toward making it as awesome and successful as our flagship store. From introducing new Business Floral packages, to creating a Garden Club, and offering new classes, the beautiful and convenient downtown Hillsboro Baseline location has so much to offer the neighborhood and community. Stephanie is definitely getting the Baseline store noticed. They were voted best garden center in Hillsboro their first year in business.

Ask Stephanie what plants especially loves right now and she doesn’t hesitate. “Salvia is definitely one of my favorites. But that might change next week.” she laughs. “There are so many incredible and unique perennials out there.” She also loves Japanese Stewartia and Paper Bark Maples.

When Stephanie is not busy helping Farmington Gardens be more amazing, she is likely spending time with her two young children and Yellow Dog. 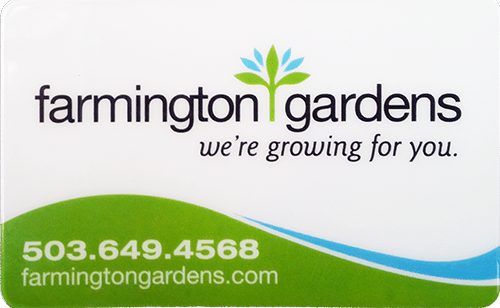 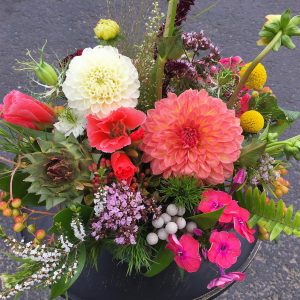